Growing concern of climate change and increasing demand of environmentally friendly geo energy accelerates Rototec’s growth. Implementation of cost-effective and carbon free geoenergy is continuing to grow in Scandinavia due to rocky soil, which is ideal to utilize geo energy. Geoenergy is renewable solar energy, which is stored underground and it can be used to heat and cool different kind of properties.

In the beginning of August, the company celebrated ten million drilled meters during its twelfth operational year. This responds to 216 584 tons of saved carbon dioxide emissions per year. As a comparison, this same amount of carbon dioxide corresponds to flying 188 826 times from Helsinki to Bangkok or driving 38 676 times around the world. With the geo energy Rototec is drilling we can save 524 926 oil barrels per year, which is 1 438 per day or 60 in an hour.

Heating and cooling with geoenergy have been taken in use in addition to detached houses also in hospitals, schools, nurseries, shopping centers, spa hotels and other large estates also in the industry. According to Sitra’s (The Finnish Innovation Fund) recent research, 40% of our carbon dioxide emissions comes from housing and large part of it comes from heating and cooling of the property. This research also mentions that geo energy is the most environmentally friendly heating option. Geoenergy increases the value of the property and is a profitable investment, economically as well for the future of our planet.

”We have noticed with joy that the awareness of climate issues has risen and it has increased demand in the Scandinavia. Norway will have oil ban in heating starting in 2020, which has greatly increased demand there and we have just won a big project for the new hospital in Stavanger. In Sweden climate change is a constant topic and the demand for climate friendly geoenergy has increased well there too. In Finland we are growing strongly as well, especially within large property segment, from which we can mention for example Sokos Hotel Koli and shopping centre Skanssi”, tells Alexej von Bagh, CEO, Rototec Group.

”Ten million drilled meters is an achievement I could not even dream of when I started this company in 2007. It has been great to see the growth and development of the company and what is best, to be able to do good for the climate as well”, says Mikko Ojanne, VP Development, Rototec Group.

Rototec
Rototec is the Europe’s largest provider of geoenergy solutions and innovative pioneer in the field. Geoenergy is renewable energy, which can be collected from the ground. With geoenergy it is possible to heat and cool properties of all sizes. Rototec’s comprehensive concept covers the whole process from consulting and design of energy systems to their implementation. Rototec Group was established in 2007 and the company operates in Scandinavia. The revenue of the company in 2018 was 50 million euros. www.rototecgroup.com 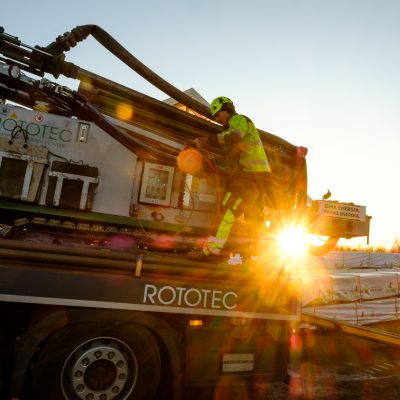