In 2007 established Rototec Group exceeded over 51 000 drilled energy wells in the Nordics. The company has grown into Europe’s largest company in the geoenergy branch and the wells Rototec has drilled saved last year 238  890 tons of CO2

“40% of carbon emissions in the European Union come from buildings so changing your heating form to a renewable one is one of the most effective things you can do to prevent climate change”, says Tomi Mäkiaho.

The amount of geoenergy has grown from the beginning of millennium from 0,3 per cent to 4 per cent as the heating form of all properties in 2018.  In the new villas the share was in 2000 only a few per cents but this has grown into almost 60% in 2018. Only one per cent of villas was heated with geoenergy in 2017 but demand for cost-effective geoenergy has grown all the time as district heating prices are increasing.

Geoenergy is the heat of the sun, which is stored to the bedrock for us to utilize and is cost-effective, renewable and itself completely carbon free. But as heat pumps use electricity, there are some emissions with geoenergy as well and they are 31g per kWh – which is over four times less than with district heating.

Rototec has drilled over 51 000 geoenergy wells in the Nordics offering free energy which correlates to 578 989 oil barrels. This saved cumulatively 238 890 000 kilos CO2 emissions in year 2019 alone. In comparison with this amount of carbon emissions you fly 208 274 times from Helsinki to Bangkok. Transfer to geoenergy supports well achievement of climate targets.

Turnover and amount of employees have grown

Year in 2019 was a year of strong growth measured by the amount of drilled geoenergy wells as well as turnover which grew to 56.7 million euros from 50.7 million euros (2018).

“We have plans to grow even further through mergers and acquisitions as well as through organic growth. Demand for renewable energy is growing all the time and consumers as well as companies are looking for ways to reduce their carbon footprint to meet the European Union and the government’s requirements and to tackle the climate change”, says Alexej von Bagh, CEO, Rototec Group.

Rototec is the largest geoenergy provider in the Europe and the company offers all the services from consulting and design of geoenergy fields to their implementation.

The company has headquarters in Finland and several offices in different locations in Sweden and Norway.

Rototec Group
Rototec is the Europe’s largest provider of geoenergy solutions and innovative pioneer in the field. Geoenergy is renewable energy, which can be collected from the ground. With geoenergy it is possible to heat and cool properties of all sizes. Rototec’s comprehensive concept covers the whole process from consulting and design of energy systems to their implementation. Rototec Group was established in 2007 and the company operates in Scandinavia. The revenue of the company in 2019 was 56.7 million euros. www.rototecgroup.com 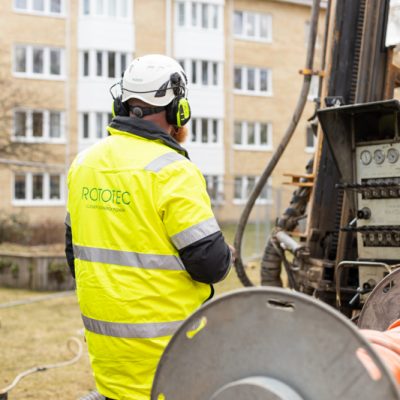